loading
Perfect World just announced that Broken Silence will be the first expansion for RaiderZ. It will introduce a raised level cap along with new areas to explore, bosses, gear, features, and much more. Senior Producer Mark Hill had this to say:

We’re raising the level cap, we’re adding new zones, new gear, and of course, more epic boss fights for hunters to discover and master. These are all additions that our players have been clamoring for, and we’re happy to give it to them!

In addition, RaiderZ: Broken Silence will introduce a new PvP Battle Arena, a new ‘Wave System’ mechanic that finds individuals and groups hunting down large packs of deadly monsters, and an improved party matchmaking system, making it easier than ever to hunt together.

You can find more information about the expansion on the official page: http://raiderz.perfectworld.com/brokensilence.

We’ll try to update our database with new items, NPCs and we hope we’ll be able to update the talent calculator as well. In the meantime check out the Broken Silence trailer:

This is it boys and girls. Every character you create now and everything you do will be permanent in the world of Rendel. With the launch of the Open Beta we get to keep our characters for as long as the game will run and it was about time. RaiderZ is free to play and you can just download the game, open an account and start playing right away – no fees attached. There is a cash shop available with items that will help you along with your adventure, but they are not something you absolutely have to have (supporting the developer with an occasional purchase is not a bad thing though). The game is published by Perfect World Entertainment in the United States and Gameforge in Europe. Both companies released launch trailers and here is some of the most crucial information you need to start your adventures.

It seems the European servers need some testing done before the Open Beta of RaiderZ starts. Unlike its US brethren, EU servers will be tested for only one day – Monday, the 22nd of October. However, still unlike their US brethren, stress testers will get to keep their stress test character in the open beta. This will give the stress testers a distinct advantage because you can level a lot in one day (if you are looking for that kind of advantage). This will help distribute dedicated RaiderZ outside of the starting zones and make things more bearable the day of the starting rush. Besides, you get to kill some monsterz like we did in the US stress test (this is a level 11 boss Queen Teresis that helps you craft some nice items)

Official info on the EU stress test can be found here.


While we are waiting for the open beta launch for the free-to-play, monster-hunting MMORPG RaiderZ, Perfect World has released new screenshots and a new video trailer for the city of Rietz.

With less than one week to go before the launch of the RaiderZ open beta launch, we’re especially happy to be able to offer a closer look at Rietz, one of the game’s higher level areas,” says Senior Producer Mark Hill. “We can’t wait to see players band together to face the threats below the city of Rietz when the open beta begins.

According to the official US Raiderz Forum post there will be 4 US servers:

US West: Crawler and Fleetfoot
US East: Chimera and Diago

You can play on any server you choose. All characters and names from Alpha, CBT, and the stress test are wiped and will not exist when Open Beta begins. Feel free to pick a server you want to play on with friends or somewhere regionally close to you.

In a surprising turn of events Perfect World announced a Stress Test for RaiderZ during this weekend. All players that have a registered Perfect World account will be able to download the game and play in the next three days. As an incentive for playing a bit longer, all players that reach level 10 will get a special reward once RaiderZ launches. You can download RaiderZ client here, but you have to register an account first on the RaiderZ NA website. Here’s the official news:

As RaiderZ Open Beta draws near, we’re excited to invite everyone to participate in our upcoming stress test to ensure a better launch experience on October 24, 2012. We want you to log in and push our servers to their limits! The monsters are back and stronger than ever so we need your help to make Rendel safe. Starting Friday, October 12, 2012 at 4:00pm (PDT), all players with a registered Perfect World Entertainment account will be able to play RaiderZ until Monday, October 15 at 5:00pm (PDT). Log in, have fun, and slay monsters along with fun in-game events throughout the stress test. Also, all players who reach level 10 or higher during the stress test receive a special reward when RaiderZ Open Beta launches. As an additional reward for players who purchased our Founder’s Pack, you will be able to try out your rare Black Arrod Mount and other items before anyone else during the stress test! Make players jealous as you lead the fight against RaiderZ’s epic Boss Monsters.

UPDATE: There is no region locking. The error we reported earlier was just a bug in the system that Perfect World fixed in the meantime.

Perfect World (North American publisher of RaiderZ) partnered with MMORPG.com to showcase another zone you will be adventuring in. Riode is a cheery zone filled with dangerous enemies. Among cherry blossom trees you will face terrible monsters that corrupted even the Saint Fhannel Monastery. 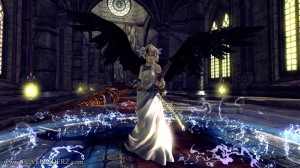 Riode also contains a World boss called Yilllis whose deadly water splash damage attacks will wipe unprepared groups in mere seconds. The zone should also house Zygniv, a terrible demon that made a short appearance in CBT (you can see all the goodies he dropped in CBT on this Zygniv page).

Watch the Riode zone video preview to get a better feel for what awaits as Open Beta draws ever closer.

IT has been announced that the Open Beta phase of RaiderZ will begin on the 24th of October 2012. in both Europe and the USA. Open Beta will feature a raised level cap (to level 35) and new monsters for you to hunt. US players will be able to purchase Founder’s packs that feature exclusive items at half the price. For 29.99$ you will get an exclusive mount, several items and a guaranteed access to Neverwinter closed beta. We assume European players will have something similar offered to them soon. Here’s an interesting excerpt from the European Open Beta press release that talks about how many characters were created during the closed beta.

Players created more than 70,000 characters and fought under the flags of 1,037 guilds in the great hunt. That’s enough to fill the O2 Arena three and a half times! As terrifying as they may be, the monsters of RaiderZ struggled to counter the onslaught of the armies of HunterZ, and at the last count 527,086 of them were missing in action. The colossal Veilnus alone was knocked down 100,031 times, proving that sometimes the life of a legendary beast is tough. Nothing was able to stop the onward march of players toward the beta level cap at 30, reached with panache by 72 dedicated individuals. A bitter-tasting defeat for our creatures indeed. The real question is now how swiftly will players reach the new goals set during the open beta, and how many more monsters will die to fuel the process…

You can find the nifty infographic of this data bellow…

Raiderz is a new Free to Play MMORPG that is about to go into Open Beta stage in Europe and the West. We sat down with people from Gameforge (publisher of the game for Europe) during GamesCom 2012 gaming convention and went over everything the game has for perspective players. I had this game on my radar for a while now because the game features these big monsters scattered around the world that you can engage and get some pretty nice loot. It is a highly polished Korean MMO and I had fun playing it in the closed beta. We had enough fun to create this website for all the future RaiderZ players. Watch the full video for description of each of the game’s features accompanied with gameplay footage.

Recap of the video: